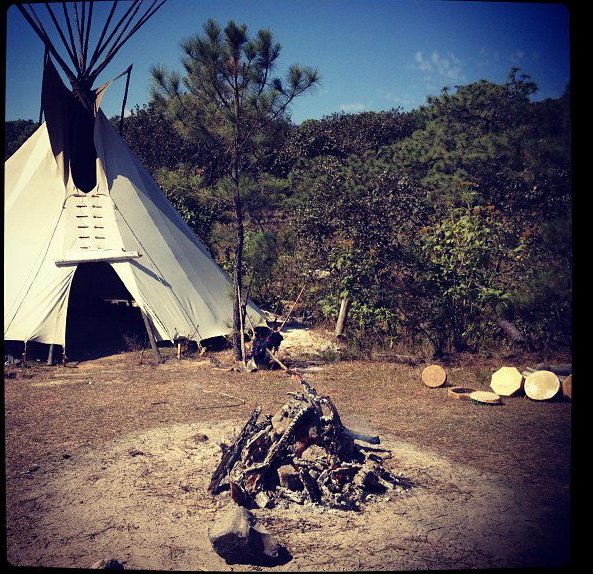 If you have been following my blog for a while you might have realised that I am a big advocate of the profound benefits of working with psychedelics and indigenous plant medicine. I have personally experienced and witnessed incredible personal breakthroughs and mental healing from their non-recreational use.

You can check out my three-part post on a journey I took with Ayahuasca here.

A positive experience with LSD in the mountains of Boulder, Colorado here.

Being in Mexico I became very interested in Peyote, a cactus native to North America containing mescaline. The plant has been used by indigenous people in ritual for at least 5,500 years for both spiritual and medicinal purposes.

Naturally I was looking for a reputable place to take part in a ceremony whilst in Mexico, when an opportunity came up behind me and slapped me across the head. I found out about a ceremony from a friend I trusted implicitly only 6 hours before it started. Mentally I was prepared, I had long ago decided I would take part in one of these ceremonies, but physically I was left wanting.

I had just eaten an enormous lunch, I really hadn’t hydrated well enough during the day and I was coming off from weeks of liver abuse. Despite this I couldn’t let this opportunity to work with a real tribe and take this medicine in a safe and authentic environment pass me by.

My friend picked me up at around 7:00pm and after almost two hours of trying to find the location we finally arrived at the ceremonial grounds some ways out of Guadalajara city. The first part of the ceremony was what is called a Temazcal.

Temazcal is a essentially a small domed tent called an inipi with a fire pit in the middle. Everyone crawls in, and lava rocks which have been heated on the fire, are taken from outside and placed in the centre. After this the door is folded shut and water is poured on the rocks.

This creates a sauna like effect, though the heat is much more intense, so much so that it is actually physically painful. They took us through four portals, a portal being when they open the door to let everyone recover a bit then bring in more lava rocks. The second the doors closed and the people began playing their drums and singing their prayer songs I was almost laughing with happiness. This is what I wanted, an authentic experience with people who really cared about the medicine.

The Temezcal lasted for roughly one hour, I grew up in Australia, I’ve worked in the Amazon jungle, I was an active Bikram yogi and I have never sweated so much in my life. In my dehydrated state the effects were magnified and I was completely exhausted. I crawled out of the inipi dazed and confused, wondering how I was going to get through the next part of the Journey.

After we dried ourselves off and got dressed in respectable clothing we all made our way into the tipi for the peyote ceremony. The shaman went through a number of prayers, blessing the medicine and each of us with tobacco before explaining the rules.

Everyone takes these ceremonies very seriously and with my limited Spanish I was occasionally in trouble for not participating correctly, but I persevered through my ignorance. Eventually it was time to take the medicine; a bowl of powdered peyote was first. It tasted bitter and almost salty it sucked all the moisture from my mouth. Immediately after came the fresh peyote cactus which we were instructed to take as much as we thought we needed. Initially I took four small pieces of the plant. Finally came a peyote tea which washed away the grittiness of the powder and eased the taste of the raw peyote.

We sat quietly as a drummer made his way around the circle as people would stop him to sing their own healing songs or simply receive a blessing. The tipi was alive with sound and two fire tenders morphed the burning coals in the centre into the shape of an eagle, then into a half moon, and further variations. As the night went on the music kept coming, the air was thick with tobacco and the fire continued to morph into various shapes as the fire tenders worked their magic.

The experience was intense; there were four rounds of peyote throughout the night and after entering the tipi at roughly 10:00pm we did not leave until about 10:00am the following day. It was gruelling, the most physically painful experience I have had with psychedelics. I was tired, I was drained, I barely had the energy to walk out of there but it was one of the most beautiful experiences of my life.

Suffering through the intense nausea and pain of sitting for near twelve hours I realised that I had been focusing on life’s smaller pleasures. These past few months have been incredible traveling through North America meeting incredible people along the way, but I had lost something.

So many of us obsess over the smallest problems in our lives, that we miss what i really important. I was doing the opposite i wasn’t focused on life’s problems. I was drinking and eating and living a life of utter indulgence. I was focused on life’s small pleasures, so much so that I couldn’t find the time to focus on the big ones.

Like feeling healthy in my body, not waking up clouded and losing half the day or taking the time to read a book or learn something new. I thought denying myself these small pleasures was giving up on experiences, but quite the opposite, it was hindering the bigger more meaningful ones.

This lead me to an even greater realisation about the direction of my life. I’ve been running this whole adventure, away from a normal life, from what’s expected of me, from being tied to one place or one thing. I discovered that this is who I am, adventuring is part of my soul and that deep down all I want to do is learn and explore, that’s what makes me happy.

Before I was almost ashamed that I wasn’t content with my amazing life back home, but now I know I’ll never stop running and I’m ok with that, I’m liberated by that. It has given me more clarity and purpose than I ever hoped to get. Peyote was a remarkable experience the people, the setting and the medicine really impacted my life and gave me a calmness and a happiness to carry with me in my everyday life. at the end of the ceremony the shaman invited me back in three days time for a Yopo Ceremony…

I would like to say that though I believe in the emotional, spiritual and physical benefits of these medicines, it is important to do your research and find someone who you trust. At the end of the day, though people talk of spirits and healing you are altering your consciousness and you are putting foreign substances into your body. Inexperienced people can take advantage of your naivety for financial gain. Problems happen when people mix substances, take way to much or take them in the wrong settings, this can be dangerous both mentally and physically so please do your research.

If you have any questions I am more than willing to answer as best I can in the comments below, or alternatively send me an email at thetravelingwhitebelt@gmail.com.

“No bird soars too high if he soars with his own wings.” – William Blake

Would love to hear your thoughts and feedback in the comments

Check out my Recent Posts Here.

3 thoughts on “The Healing Plants Part I: Peyote”

Traveling Philosopher and Author of The Traveling White Belt Blog I believe we are all addicted to happiness of some kind. I’m Addicted to the pure kind, the one true happiness that is infectious to all it touches. The denunciation of selfishness and the realisation that life is good! Contact me at thetravelingwhitebelt@gmail.com